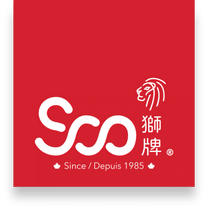 FOUNDED IN VANCOUVER, CANADA IN THE YEAR 1985 BY A YOUNG ENTREPRENEURING COUPLE, WITH ONE AMBITION

Soo Jerky’s signature red box is a recognizable symbol in many Asian households. With over 35 years of tradition, innovation and experience, Soo Jerky Ltd. is always exploring new ideas for delicious meat snacks and convenient frozen foods.  Our jerky has been shared on many dining tables, given as gifts and enjoyed as a treat. We started in 1985 with a 1,400 sq.ft space and have expanded to a 10,000 sq.ft. food-safe facility offering over 40 different meat snacks. Soo Jerky’s legacy is in the commitment that began with Phillip and Soo Wong and was passed down to their two sons, and finally to all the loyal customers who enjoy our “popular meat snacks” with “traditional good taste”!

With the dream to share their Asian style meat snacks, their jerkies first hit the shelves in Vancouver’s bustling Chinatown community. Philip and Soo handled all responsibilities of the business – from cooking and drying the meat, packaging the product, making sales, delivering the product to checking and stocking the shelves – all while raising their two young sons.

The story of Soo Jerky Ltd. started with a young couple with an ambition, an entrepreneurial spirit and a name, “Soo” – the legacy of Philip and Soo Wong’s company. Philip and Soo wanted to bring the great flavor of South-East Asian jerky to North America. In 1985, they started Soo Jerky Ltd. out of their own home in Vancouver, Canada. Soo Jerky made its first major debut at The 1986 World Exposition hosted in beautiful Vancouver, BC, Canada.

In 1989, Soo Jerky’s small manufacturing facility was licensed with Agriculture Canada, now known as the Canadian Food Inspection Agency (CFIA), as a Canadian federally inspected meat plant (Establishment #267). This spurred a growth for the company as Soo Jerky started to export product across Canada as well as cities in the United States.

By 1989, our Shredded Dried Pork products had also become one of our most popular items. Soo’s reputation for quality meat snacks grew. Our success and knowledge of various Asian style jerkies allowed us to expand our selection of products. Based in the beautiful West Coast city of Vancouver, it only made sense for Soo to promote the West Coast’s great ocean fare. With years of jerky-making experience and some innovation, Soo Jerky developed the popular Salmon Jerky as a way of sharing a taste of the West Coast’s famous seafood.

By the late 1990s, the business that Phillip and Soo started in their home kitchen had expanded into two manufacturing facilities creating 20 different varieties of jerky. With such great success and a new millennium on the horizon, Soo Jerky decided to venture into the market of non-dried meat products. Thus, we developed another line of great products which include meat balls, longaniza and sausages, all made with the same commitment to quality and standards as our legendary beef, pork and salmon jerkies.

Today, Soo Jerky Ltd. has expanded from 1,400 sq. ft. in 1986 to a 10,000 sq. ft. facility today offering over 40 different meat snacks for our customers to choose from.  With our wide range of flavor from sweet to savory to spicy, we have something for everyone.

THE STORY OF SOO JERKY

Started with a young couple with an ambition, an entrepreneurial spirit and a name, “Soo” – the legacy of Philip and Soo Wong’s company.

Funding for export assistance has been provided by Agriculture and Agri-Food Canada and the BC Ministry of Agriculture through the BC Agrifoods Export Program under Growing Forward 2, a federal-provincial-territorial initiative. The program is delivered by the Investment Agriculture Foundation of BC.

Soo – pronounced "sü", like the name "Sue" – is the namesake of one of the founding couple, Philip and Soo Wong. When the company was being formed (then Soo Singapore Jerky Ltd.), their original idea was to name the company "Singapore Style Jerky" because the jerky was originally marketed towards "Singapore-style" jerky lovers; however, trade regulations did not allow a country name to be principal in a company name, and so they chose "Soo Singapore Jerky" instead. The company logo then, designed a short time afterward, is the name Soo with a lion head incorporated onto the letter "S" and the Chinese characters "shī pái" (Lion Brand) alongside.

How Does Asian Jerky Compare With North American Jerky?

Asian jerkies are typically sweeter than North American jerkies (although there is a trend for many North American jerky makers to incorporate more sugar in their recipes). We have many different varieties of jerky, but many are very flavourful, some with exotic and fragrant spices. The styles can vary quite dramatically as well, with some jerkies being dry and others being surprisingly moist (and yet still shelf-stable) Many are available with the option of spicy or not spicy.